Herewith we would like to wake up your interest in an exotic event which takes place every year on the Berlin Olympia-regatta distance in Grünau. Up to 100 fun teams and numerous sports teams with more than 2000 active and 3000 guests, meet every year in June to the biggest water sport spectacle of Berlin. Already to 18. times delivered Berlin Dragonboat city cup and 10. Open Berlin mastery provides with his atmosphere, even in our town not poor in attractions, over and over again for big attention with press and audience.

Platform for enterprise – The sponsor’s programme

The dragon’s boat sport has developed during the last years rapidly to a media event with appeal to the public. International racing events are accompanied by thousands spectators. The reporting on television and in the print media occurs in big presentation. The audience is already informed in the approach by posters, announcements and commercials about the event.

Bundled up and tailor-made advertising packages

An excellent platform offers to the CITY CUP BERLIN for enterprise to present itself and her products in the sphere of the event / public. By the big participant and visitor number from all areas of the life and from the whole of Germany, Berlin owns city cup after the space of Berlin big resonance and powers of interpretation. In the following we have shown Exemplarily different advertising packages. The packages can be modified according to the individual demands. 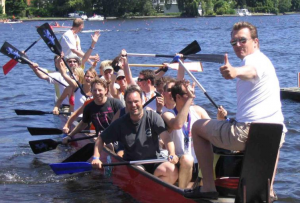 If you become partners with the city cup.